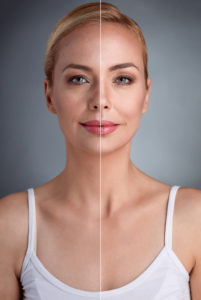 These days when you talk about lasers many people instantly conjure up images of battling spaceships and the like from something they just saw at the neighborhood multiplex. But Dr. Hetzler uses a variety of lasers in his practice for different procedures, and you won’t find a Stormtrooper or Wookie in sight.

The pulsed-dye laser has a pulsing beam that is heavily absorbed by hemoglobin, which is what gives blood its red color. The laser destroys abnormal blood vessels, making it effective for broken capillaries and spider veins.

This laser family is sometimes called “pigment blasting.” This group of lasers is effective for eliminating the black and blue pigments of tattoos, pigmented lesions, and age spots.

The carbon dioxide laser delivers invisible light that is absorbed by water. Since water is the primary component of human skin, it is effective when dealing with it. The laser energy can be focused and used to cut tissue and instantly seal blood vessels. When the laser energy is defocused, it vaporizes a superficial layer of skin, such as in resurfacing procedures.

The YAG laser is effective in surgery of various types of hemangiomas, skin growths with heavy concentrations of blood vessels. Unlike other lasers, its tip can be placed directly on the skin.

The argon laser is similar to the yellow pulsed-dye laser. This laser emits a blue-green light that is absorbed heavily by the color red. It is effective on spider veins on the face, “strawberry” birthmarks, and similar pigment issues.

The copper laser is a newer laser. It emits a yellow-tinted light and is effective in treating age and liver spots, rosacea, and other red-pigmented areas.

Which laser is right for your procedure depends on your individual situation. But Dr. Hetzler has extensive experience and training with all the lasers in his practice. Put them to work for your aesthetic needs by calling (732) 219-0447.